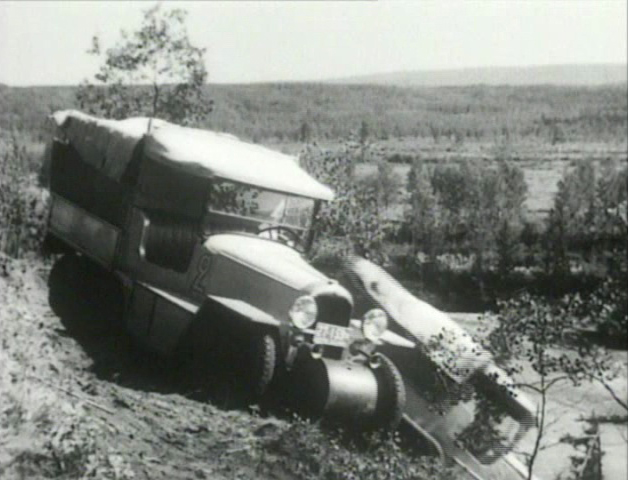 One thing that can be said for the Rocky Mountains is that they’re there. Noticing the same thing about Everest in 1924, the Englishman Leigh-Mallory determined to climb it. The French-born naturalized American multi-millionaire Charles Bedaux, grasping the immutable fact of the
Rockies’ existence a decade later in 1934, resolved not simply to climb them but to traverse their rugged northern British Columbia mid-section with a caravan of Citroen half-tracks.

Today it might be termed an ego trip by a wealthy sportsman to whom the limits of a polo field felt too confining. At the time, it was officially sanctioned as the Bedaux Sub~Arctic Citroen Expedition and less officially the White Cruise, as earlier Citroen half-track ventures in Africa and Asia were dubbed the Black and Yellow Cruises. Citroen’s heavy investment in caterpillar tracked autochenilles had been partially amortized by well publicized slogs through the Sahara and Gobi Deserts and across the Himalayas, and now it was the Western Hemisphere’s tum.

Any vulgar implication of publicity stunt was dispelled by the trek’s soberly stated purpose of testing the feasibility of mechanized polar exploration, autochenille style. That a middle-aged tycoon with no known scientific or technical background was heading it up could be easily explained with impeccable French logic: Bedaux was footing the bill.

But by any name and however tenuous it objectives, the Bedaux Expedition rates at least a footnote in that great big funny book in which quixotic automotive exploits are recorded. Ego trip or not, Bedaux in one grand conceit had anticipated the essential elements of the Baja 1000, the Cannonball Baker Sea-to-Shining-Sea Memorial Trophy Dash and the Press-On-Regard- less Rally, all long before their time. Dwarfing the lot in scope and sheer chutzpah, the Bedaux Expedition was the North American prototype of these and events like them that proliferated in the postwar leisure boom as outlets for high motoring spirits and a certain daffy brand of luck: It was grueling, performed more or less in private and had a slim if not zero hope of any payoff. And like them, it pitted man and his trusty machine against an obstacle that normal folk gave no thought whatever to pitting themselves against-in this case, the entire Rocky Mountains. Bedaux may not have thought too rationally, but he sure thought big.

That’s the way with your typical American pioneers. That was certainly the way with Mr. Charles Bedaux, who through energy, nerve and a certain kind of vision had risen from dishwashing to become internationally rich and famous–and scorned-as the father of “one of the most completely exhausting, inhuman ‘efficiency’ systems ever invented,” in the words of a contemporary critic. Bedaux fit the ruthless-tycoon image even in stature, standing a Napoleonic five- foot-six, and any guilt he might have felt about his ill-gotten gains was well-concealed within the trappings of a baronial mode of living almost comic in its pomp. Bedaux headquarters in New York was an office suite high up in the Chrysler Build- ing, modelled after a medieval monastery, and the Bedaux entourage moved with the seasons from a game preserve down south to a grouse moor in Scotland to Chateau de Candy, a rebuilt Renaissance castle at Touraine in the countryside of France where in 1937 the Duke of Windsor, formerly King Edward V I I I of England, would take Wallis Simpson in marriage.

For Bedaux, the British Columbia jaunt was a mere temporary distraction, a gaudy lark undertaken by a restless, self-styled man of action. Just as four years earlier he had crisscrossed North Africa by motor vehicle and three years later would roam around Tibet.


Money Makes the Cars Go Round