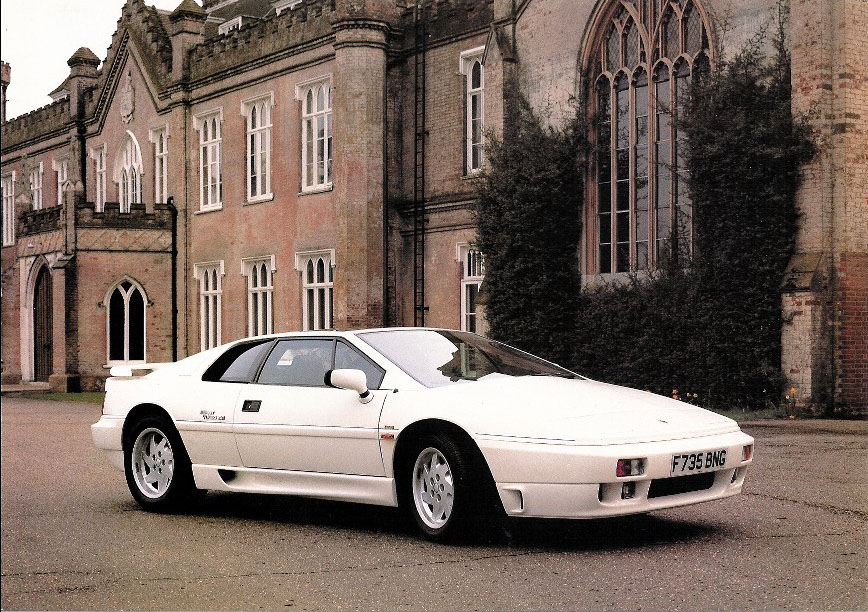 The charge-cooled SE Esprit derivative has been the most powerful variant with the most accelerative power and the fastest-selling Esprit to date, with 264bhp and 0-60mph (0-100kph) in under 5 seconds. From its formal unveiling on 10 May 1989 to the close of its debut year, the 160mph (260kph) Lotus Esprit Turbo SE recorded production of 563 units. This figure handsomely exceeds the production level of any previous Esprits, save that of the $1 in 1977, and then, there were no alternative Esprit models to distract customers.

Naturally, this was the most expensive Esprit to date. The SE was launched in May 1989 at £42,500, which was then a bold thrust that took them closer to the ‘starter’ Porsche 911s than for many years. The price tag reflected that Lotus overheads were constantly increasing, as they staffed and invested for the 1990 Elan.
Some 600 engineers were listed on the payroll of Lotus Engineering or Lotus Cars at this time; just thirty of them worked for less than twelve months on the development of nine prototype Esprit SE vehicles. More were employed on increased-durability trials, which now equated to the GM 100,000-mile procedures on any new product. Of specific test interest to Esprit SE customers were a 400-hour time of dynamometer tests in America and Britain and two 36,000-mile harsh durability trials at the now Lotus- owned Millbrook facility in Bedfordsrental. This facility covers a 2-mile speed bowl, and durability and handling courses.

At the British press launch, Powertrain engineer Simon P Wood (later a group leader on the Lotus Omega/Carlton project) explained that the SE owed its existence to the 1988 ‘GMP4-coded Esprit’ variant. The latter was the second fuel-injected Esprit in emission cleansed trim, and one that, like the SE, ‘runs only unleaded 95 RON fuel in conjunction with a catalytic convertor exhaust system’.

In case you are wondering, the first fuel- injected Esprit was created in October 1985 for the American market. It was superseded by the GMP4 (a coding referring to GM- sourced fuel injection and engine management system) in September 1988, after 881 had been manufactured in HC power trim.

In Europe, the GMP4 specification (rated at 228bhp) was also available in strictly emission-controlled markets from December 1988, and was also superseded by the SE. The SE had thus become a Lotus ‘world car’, sold in much the same catalytic convertor trim for all markets – a considerable relief after years of fiddling around with varying carburettor and exhaust specifications.


The Esprit SE on the Track