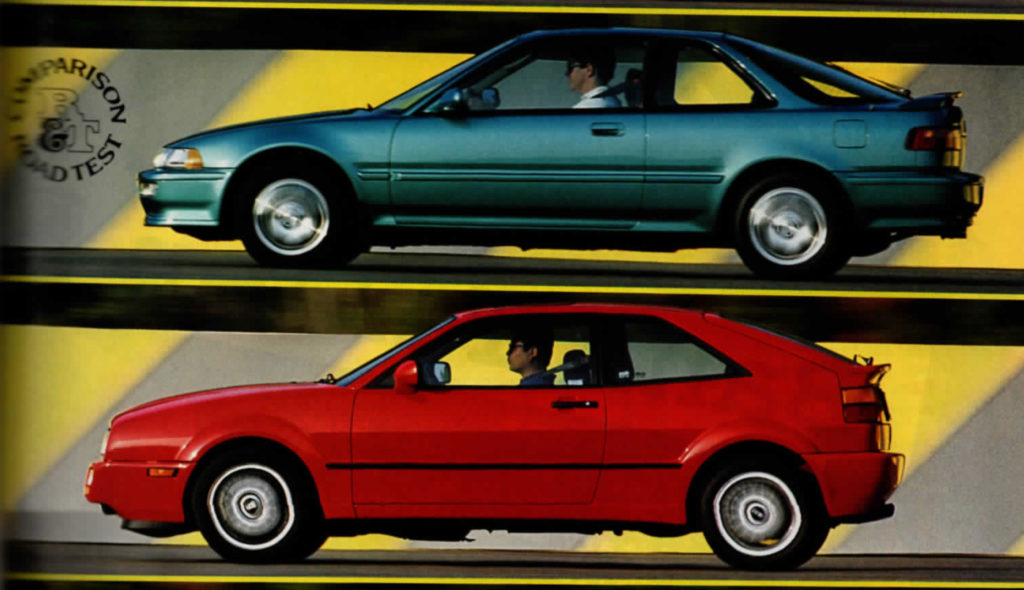 We sequester five readers to help judge how Ford’s latest holds up to a jury of its peers: the Acura Integra GS-R, Mitsubishi Eclipse GSX, Nissan 240SX SE and Volkswagen Corrado SLC.

FROM THE BANG of the starting pistol, Ford had a clear winner on its hands. The original Ford Probe, a saucy little sports coupe—with a chassis and engine designed in Hiroshima by Mazda, a body style and interior design via Dearborn, Michigan, and assembly at Mazda’s Flat Rock. Michigan, plant—was snapped up by an eager public at the rate of 133,650 cars in 1989, its first full year of production. Actress Lindsay Wagner, resplendent in her white jumpsuit, told all through TV ads how the Probe was the car of tomorrow in Ford showrooms today: on reflection, she was a fitting spokes-person for a car whose appeal seemed virtually bionic. We thought highly of the car as well, stating in our March 1988 road test, “The Probe GT is just the ticket for the enthusiast who dares to be different . . . A timely Ford, that’s what the Probe is. It’s a specialty spurts coupe designed to appeal to buyers who might other-wise buy Japanese for a variety of reasons, including price/value.” Four years have passed. Ms. Wagner still looks good in a jumpsuit, the Mazda/Ford alliance is stronger than ever, and a provocatively styled all-new Probe arrived in our test lot. Much technological water has flowed under the bridge since 1988, and competition in the sports-coupe class has grown exponentially more fierce. Can the Probe GT deliver the goods when NAcssed ‘en the context O the Acura lritegta 0S-R., Mitsubishi Eclipse GSX, Nissan 240SX SE and Volkswagen Corrado SLC, some of the best examples of the breed? To find out, we put them all through our usual test procedures. And to add some fresh perspective, we
74 ROAD & TRACK

culled a select group of readers of varying ages and backgrounds to participate along with our staff. There’s Mike Hickman, a fledgling realtor with some 250-cc Zip go-kart racing experience under his belt. Beverly Jensen, a preschool co-director, proved ideal, what with her quick re-actions necessary to keep those 5-year-olds in line. The aircraft back-grounds of Chuck Bailey and Kevin Reese (Chuck was an Air Force pilot for many years: Kevin currently works at McDonnell Douglas and used to do assembly work on airliners) figured into some of their unique insights on the cars; Kevin also has some competitive rallying experience. And Kent Shocknek, newscaster for KNBC. Channel 4 in Los Angeles—well, you know how we journalists arc quick on our feet. For the purposes of handling evaluacion, not to mention haying MOTE than a body’s entitled to. we did many circuits of a 1st- and 2nd gear auto-cross course and a slalom with 75-ft. cone spacing. Following this was a road loop out on the streets of Irvine, California, where readers’ real-world impressions of the cars were taped by our staff members. The results? Read all about it, in order of highest to lowest overall average points from our staffers.
our subjective evaluations, it was of-the-podium—the readers pie as a winner in every Performance • and virtually all Comfort trols categories: we also ran highest overall in the final tall.. Like the last-generation Probe.. new car shares its chassis and train with its sister car, the new MX-6 R&T, July 1992), albeit wi significant tuning changes to spring rates, shock valuing, bushing hardness. wheels and tires. Driving the front wheels in the GT is a smooth-revving transverse 2.5-litre 24-valve V-6, which replaces the last generation’s peakier turbo inline-4. Suspension is by struts all around, with a substantial disc brake at each corner (ABS is optional). Tires are the largest of all this cars, at P225/50VR-16. Not one of the Probe’s 2910 lb. is excess flab, as the car ranks as one of the stiffest-feeling in the test. And handling was impressive to everyone. Said Chuck, after hot-lapping our handling tests: “The Probe was great! . . . Just its overall balance, the feel be-tween hard acceleration and turning and braking as I came out of the slalom.- After the surface street loop, he added. “I think the ride is harsher than most of the other cars. Feels like the heelbase is shorter, or maybe it’s just the way it’s sprung.” Negligible bed. roll, quick turn-in, modest understeer and great grip all add up to grins. Gut rile crerring feedback or Corrado or 2401SX._ be beaten oa out course. “Wives as fast as 1 comiL
Ford Probe GT LIKE. AN OLYMPIAN decathlete, the 1993 Probe is versatile, coordinated and aces a great nurasei o4 thmwseN1. Its styling really knocks us out. lts interior is esthetically pleasing, ergonomically correct, and finished with hand-some, durable-looking fabrics and plastics. The chassis doesn’t have the most handling character of the group, but is unflappable in its composure. In
kigrint- .
At 7.9 SCCOMIIII Probe’s quickness rites as MI this-pack, but its charms extend beyond mere acceleration. “The engine has a really nice sound to it, a middle-range pitch,” said Beverly, “and it’s quick at all speed levels, even after you’ve braked and have to get back on it again.- Kent adds, “This one is very smooth . . . the interior noise is a bit more sewing-machinelike than it was in the Corrado.- The gearbox was ranked by all as sturdy-feeling and robust, though several mentioned they got 5th instead of 3rd a few times be-lot. Praise of the interior layout and styling was universal. “Ventilation controls are simple,- said Mike. “Of course, I had a Mustang GT and they were just like this.” Instrumentation is very complete, with oil-pressure and volts gauges plus the usual tach,