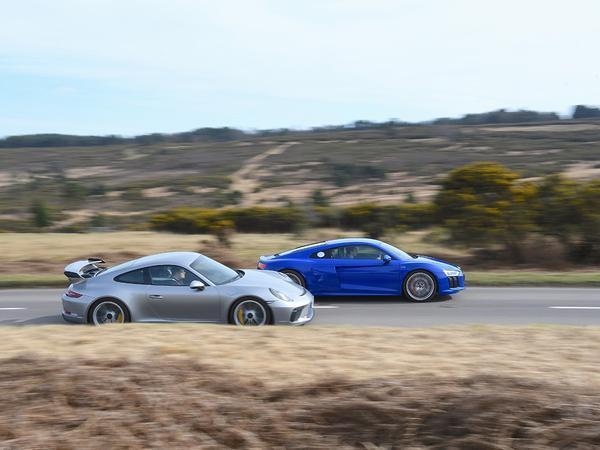 Originated in Germany, Audi R8 RWS and Porsche 911 GT3 have similarities as well as drastic differences. Both cars rear wheel drive versions but Audi R8 RWS is the first to drive without front drive shafts, most probably used to reduce weight to compete with Porsche 911 GT3.

Porsche 911 GT3 has a rear engine, which quick to accelerate and tend to over steer but supple beautifully under the control of racetrack expert. Right suspension and engine tuning needed to overcome over steering – tend to turn more sharply – effect of rear engine. A good example of the same is Porsche 911 GT3.

Audi R8 RWS engine is mid-mounted or at the rear mid position of the exotic car giving traction at equal levels to all four wheels. It balances the weight between front and rear providing stability while taking turns. It costs the space for back seats and goes out of control in a spin, due to the placement of gravity at a mid position. However, compared to rear engine Porsche 911 GT3 this gives more stability to Audi R8 RWS.

The gear transmission system of Audi R8 RWS is seven-speed twin-clutch automatic, there is no manual option, while Porsche has a seven-speed PDK automatic transmission, which allows manual gearshift and automatic mode both for smoother gear changes. This caused no interruption to power, resulting in faster acceleration.

Audi R8 RWS is a Limited edition (999 cars produced) was not a successful model as expected by the manufacturers. Elegant in poise and stable at every part, the drive is a bit frail as in a four-wheel but has good supple with a lighter steering movement. As always Audi does, the car performs great at extreme condition of grip and footing. At low speed, the Audi R8 RWS is quieter but high speeds make it shaky.